Updated On [modified_date] by Zoe Craig 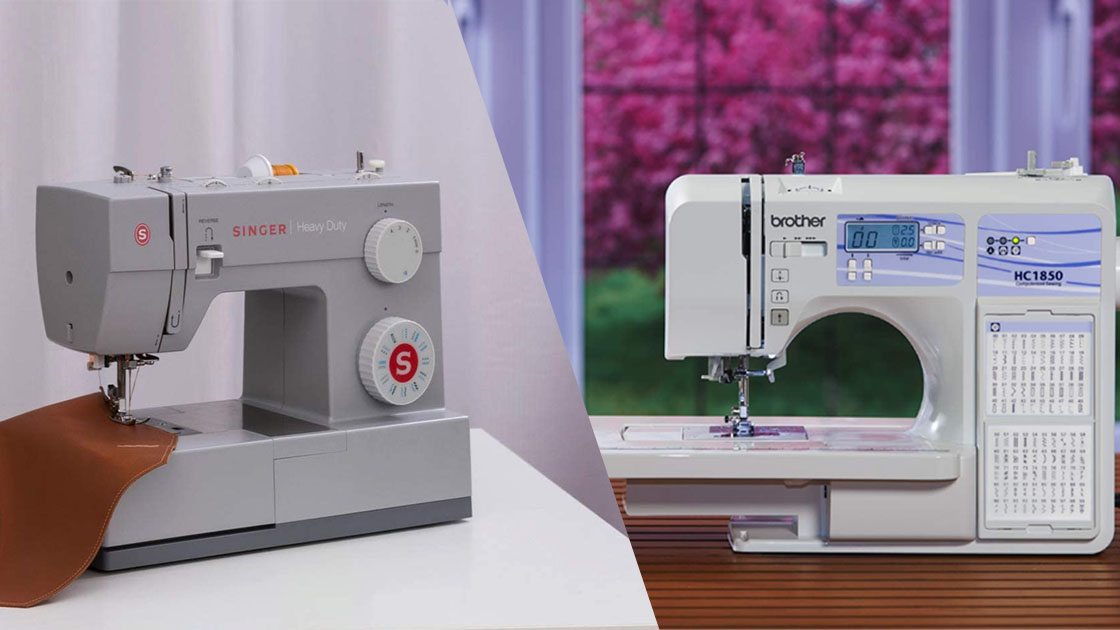 When buying any sewing machine which brand comes to your mind first? Obviously, they are Singer & Brother, right?

These two giant brands are the best selling company in many countries. So, when anyone comes to buy a sewing machine, they either choose a singer or a brother.

Well, if it is about to know Singer vs Brother sewing machine which one is better, but you still confuse which one to purchase, then this blog is for you.

Based on pointing out some differences, we will make sure to know which one and how it would be good for you.

If you can’t find the differences, then we will help you and let you know some of the major differences based on them:

When it comes to generalizing between two brands and sort out which one is better, then we must say it is probably an insane task. And why not, as both of this line up have different suitability, so when one line up is good to go for a specific sewing task, then other falters. Reversely, this may happen to the vice-versa as well.

However, there are a few differences which we may mark, what they are?

Well, if you are going to own your first sewing machine which will turn out to be beginner’s model, then we will suggest you with Singer.

On the flip side, experts will choose Brothers with its tons of features and different added patterns with stitches and embroidery patterns.

Another common difference would be sophistication. Commonly, the brother machine comes with more techy-features, and some of them amazingly come with advanced computerized gadgets with a larger screen.

But overall comparison, the two brands in terms of reliability then most of us will mark on Singer, the rating of it is really praiseworthy.

There is no doubt that both of these line-ups are made of a durable metal frame. But when it comes to choosing the one is for ensuring better durability, then we need to check them out.

The heavy-duty machine would be such one that may work perfectly regardless of any type of fabric. Mostly, we will mark on heavy fabrics like denim, canvas, or vinyl. Besides, the best one should also require to deal with the multiple layers while sewing.

So, when we dig deep into the different types of sewing machines in order to see which is more durable, then we find Singer as the best machine to purchase.

However, the Brother machine has recently brought forth some machines like Brother ST371HD a few years ago, which are preferably good contenders with Singer.

But, when you will choose a brand over another brand in terms of durability, then Singer would be the only best sewing machine, which will last long from generation to generation. These machines are impossible to break, and the fitness is top-rated resemble the tank.

Both are the best in their business; however, we still have faith in Singer 4411. Because the durability of Singer 4411 is far better than the Brother one.

Based on other species, let’s narrow down the comparison below:

After the durability, the Singer model has the fastest speed which is capable of sewing up to 1100 stitches in a minute, sounds impressive. The Brother model is behind Singer as it can stitch up to 800 times in a minute.

In terms of the number of pressure feet, the Brother comes to rise its feet with 6 pressure feet, where Singer 4411 has Four. However, when it comes to having warranty both have 25 years of an extended timeline.

In conclusion, the differences are not a big deal. So if you choose Brother over Singer or vice versa,then both would be good to go.

These brands have a good reputation in producing quilting machines for a long time, and both are recommendable. There are a few things to consider while choosing any device for quilting. For example, they would be the speed, a number of stitches in a min, free-motion foot, long free arm, size of the table, etc.

Based on them, we found Brother often comes with more features for quilting. The generalization may falter in a specific model like the Singer vs Brother sewing machine. But the overall inspection denotes that Brothers line up has more features.

There are a number of things you need to sort out while you are purchasing a sewing machine for your embroidery work. Obviously, Brothers and Singer’s model would be the best match for it.  But when to sort out one of them, then it requires to unravel some models.

Before you are going to invest in a machine, make sure which model has more updated built-in patterns. Also, you need to know whether it is applicable to the USB or via Wi-Fi directly.

Here are some features we show you below and based on that, you should judge the model of Brother & Singer both:

Ironically, we again recommend you to go with Brother.

Well, it isn’t easy to sort out which brand has explicitly useful features as an overlocker or serger machine. Because both of them are producing so many successful overlocker machines and the overall functionalities are good to go.

However, there would be few differences to some extent.

To find out the differences, you need to have a look at some conditions. For example, they would be the easy threading, the number of stitches each model offers, preferable tension control, and Free arm.

Based on the above features, you can choose a model of Brother Brandover the Singer, or vice-versa.

Sum Up The Comparison:

After reading between the lines of the comparisons, now you specifically get to know which things to sort out and when. A sewing machine means a lot to you, and as it is versatile, so not necessarily a specific model will give you every single benefit.

Instead of that, a model may turn out great while doing some embroidery crafts; conversely, it may falter in some other part of features. Therefore, it is you who will make choices between models of Singer vs Brother.

SewingForest is a participant in the Amazon Services LLC Associates Program, an affiliate advertising program designed to provide a means for sites to earn advertising fees by advertising and linking to Amazon.com. For this, no extra cost to you. Learn more…